Background
I designed the self-serve password reset function to replace Raisin's previous process, which involved users manually contacting Raisin's Customer Service teams to request a 'change password' PIN letter to be sent physically to their home address in the mail. This process was both frustratingly inconvenient for the user and costly for the business, both time-wise and financially. My role was to research best practices and subsequently design a self-serve password reset function that resolved all of the issues associated with the manual process and which incorporated the principles of best practice for this type of function. Once I fully understand what constituted best practice, I began the design process. 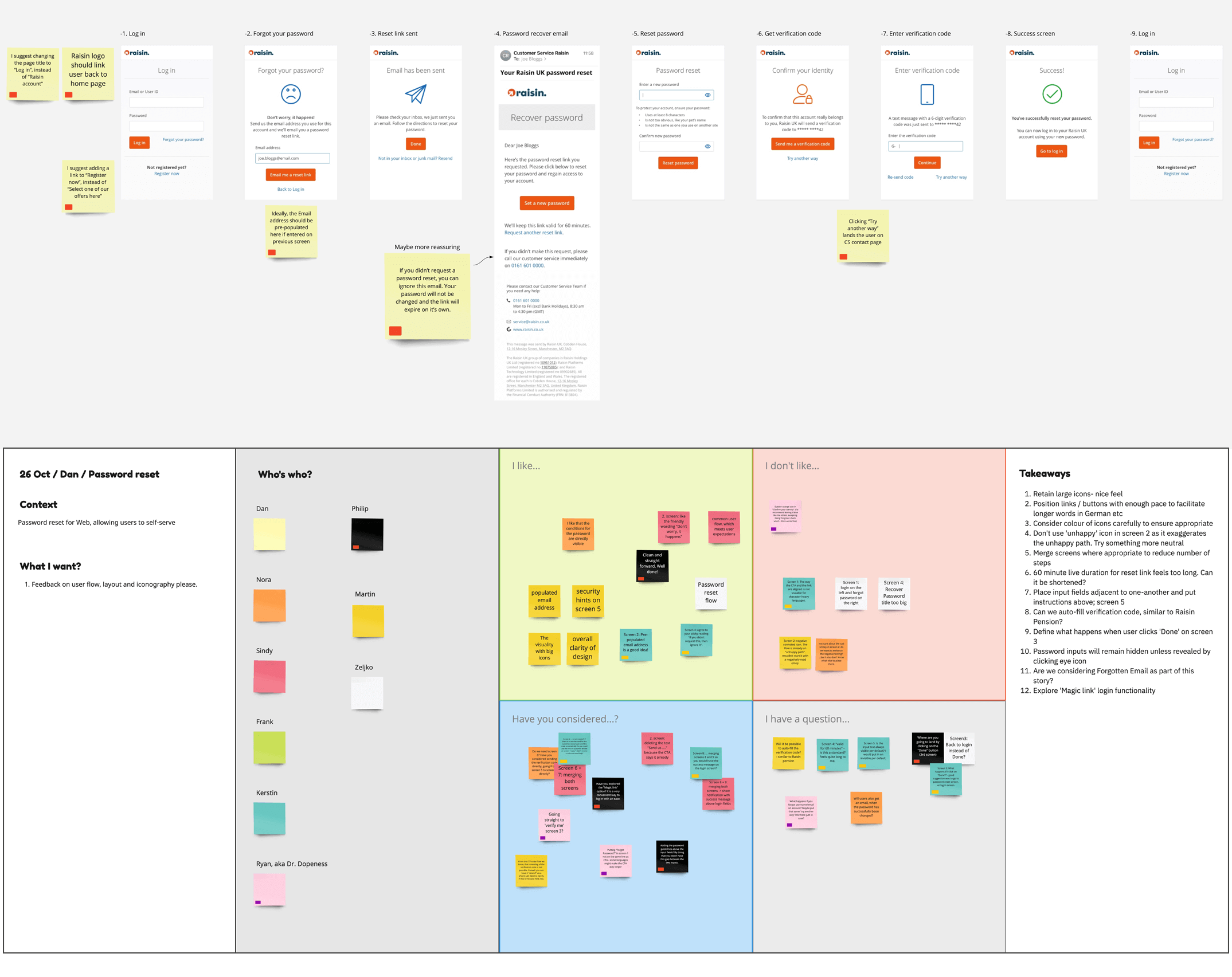 During my design process I liaised with the Berlin-based UX and Graphics teams and shared my work-in-progress at 'Weekly Design Sync Huddles', which are basically remote ideation and feedback opportunities where all team members can share and align thought processes. The Miro board here exemplifies how Huddle attendees contributed by adding comments and discussion points, under subheadings; 'likes' , 'dislikes', 'have you considered?' and 'I have a question', helping to establish a list of 'takeaway' points for design consideration. 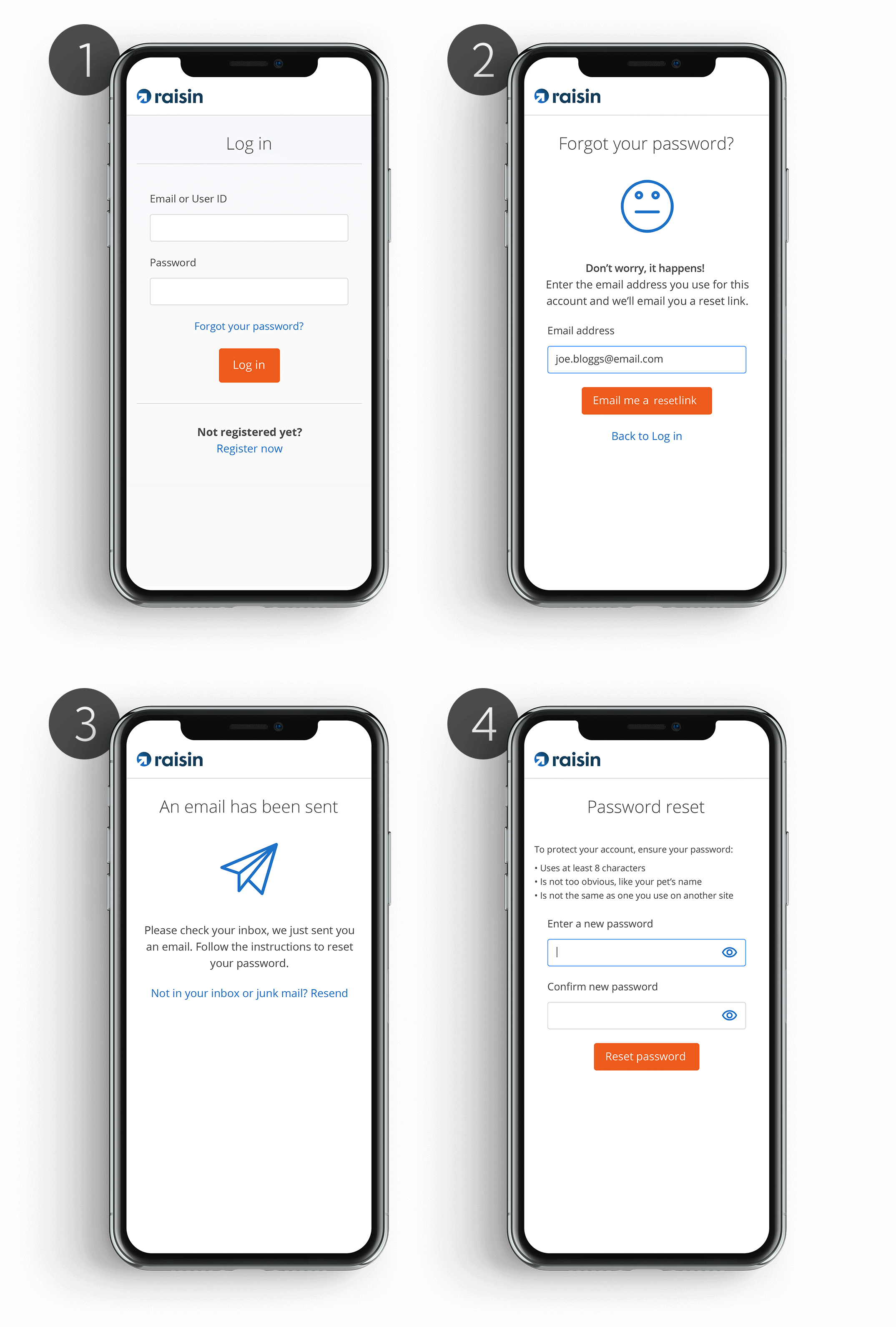 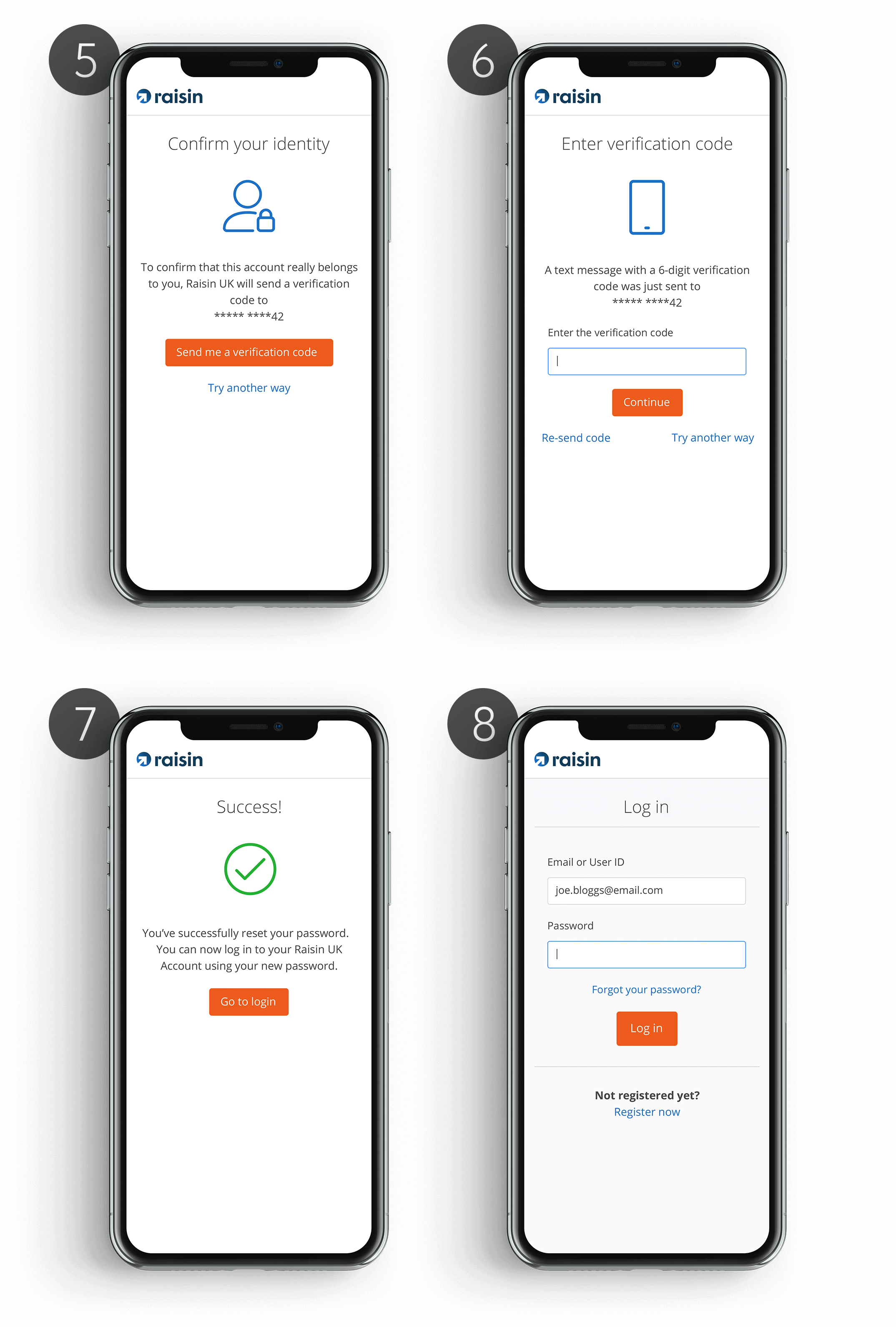 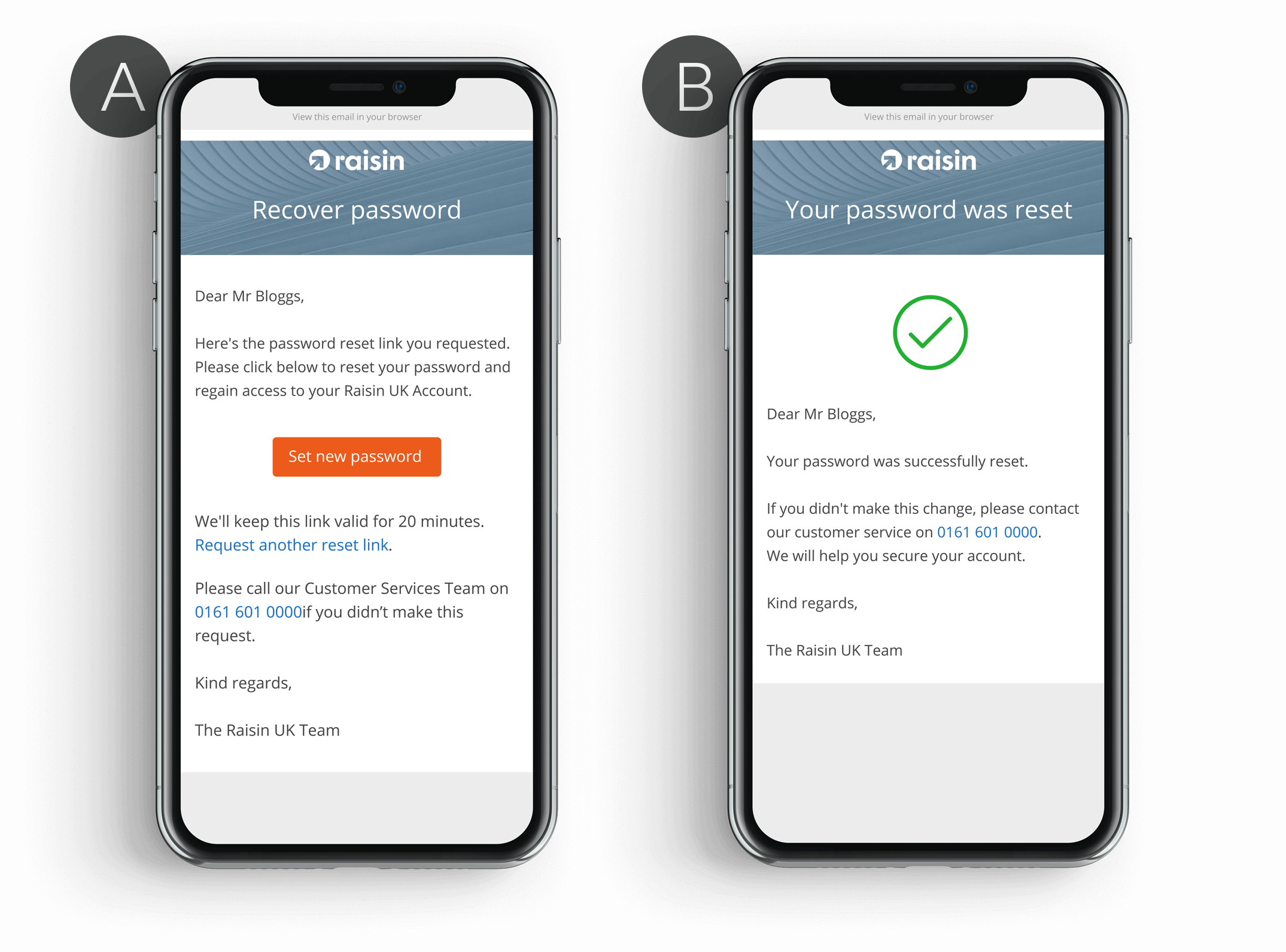 The technical implementation of the password reset function relies upon an open source identity and access management software tool and the user flow is designed to take advantage of the innate security features of this tool.

The new functionality was rolled out group-wide, across all Raisin platforms in Q2 2022, greatly improving both the experience for users and internal business processes. 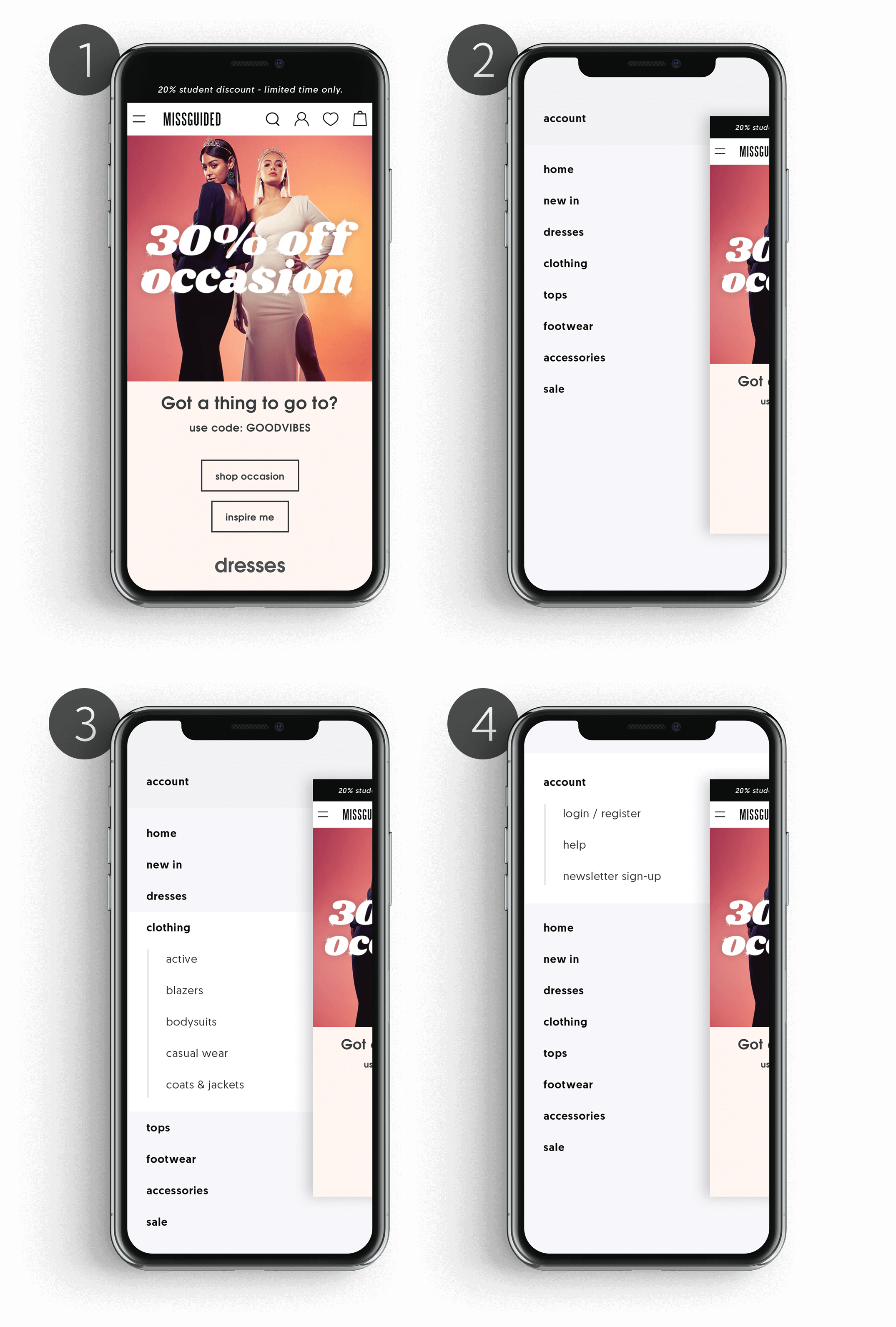 Background
Missguided is a fresh and vibrant online store that aims to stay on top of the latest trends in order to provide their customers with the best that the fashion world has to offer. Missguided’s vision is to be the world’s largest, coolest, most fun, relevant and aspirational fashion brand for millennial women. Inspired by real life, it is bold, straight talking and forward thinking.

For four and a half years, I worked as part of Missguided’s in-house e-commerce team at the company's Manchester-based HQ, initially as their solo UI Designer and later as Senior UX Designer.

Project
In 2017 I initiated a project which explored the way in which users interact with the site's navigation on mobile devices. This was driven by the the company's desire to offer a fun and unexpected experience for the user, without of course compromising intuitive functionality.

Here is an early prototype video demonstrating the animation which reveals the search function and then the main navigation menu.

My initial idea was well received by internal stakeholders and I built several iterative prototypes of the new menu feature to test with real users in moderated user tests in Missguided's in-house UX lab. The feedback and insight gleaned from these user sessions proved invaluable and shaped the direction and outcome of the final design.

The range of products offered by Missguided is extensive and varied, therefore it was critical that the menu content structure was optimised to match our user's expectations. For this reason, the project also involved refining the taxonomy and information hierarchy within the navigation. I facilitated closed card sorting tests, both within team ideation workshops and more importantly, with Missguided's own users, to finalise the navigation menu and establish a final optimised structure. 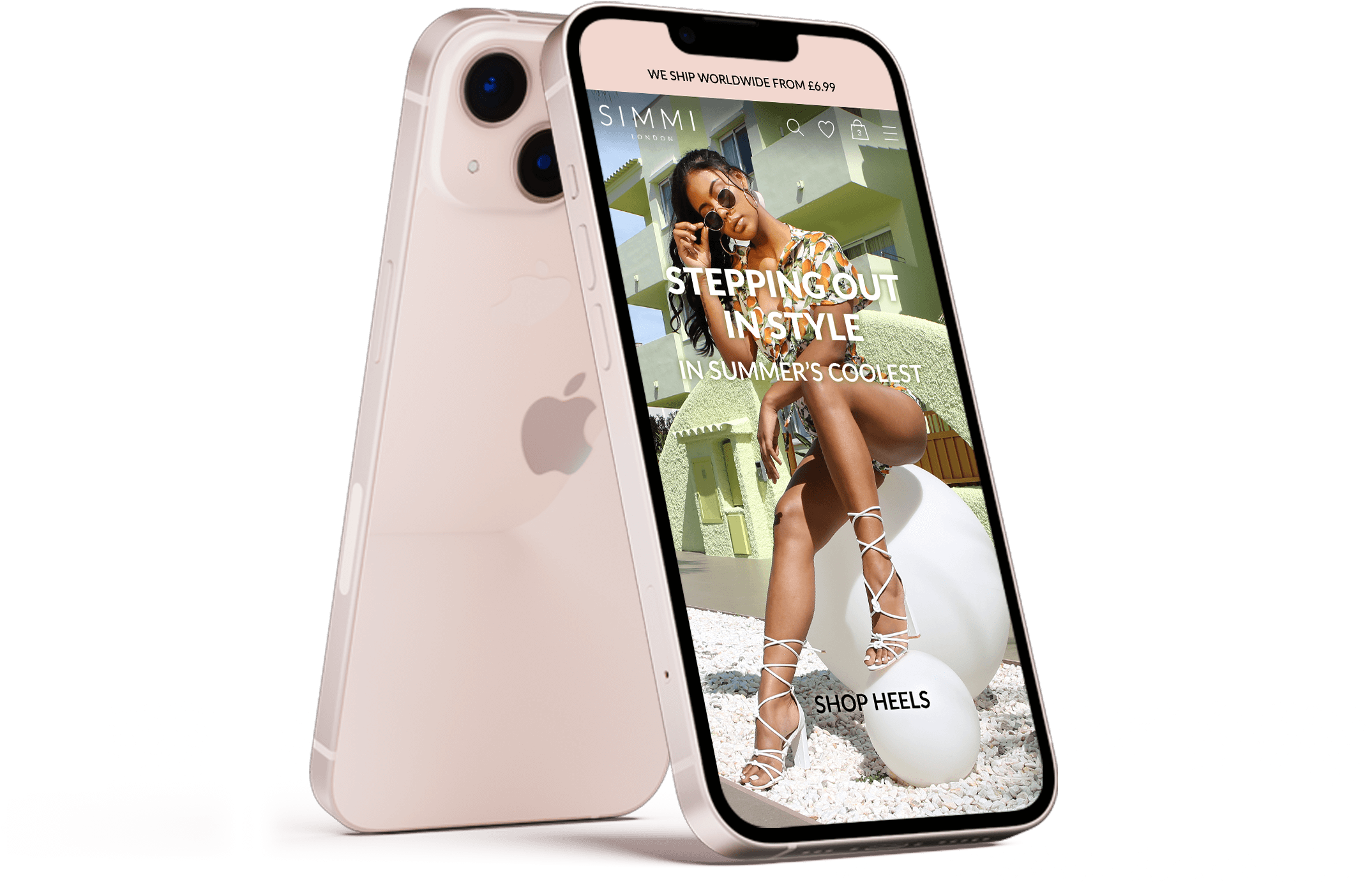 SIMMI are a London-based footwear retailer, offering the latest footwear trends at affordable prices, for global-minded girls. SIMMI are constantly inspired by the bold and accomplished women of the world, whether it be in their daily lives or on their social channels. 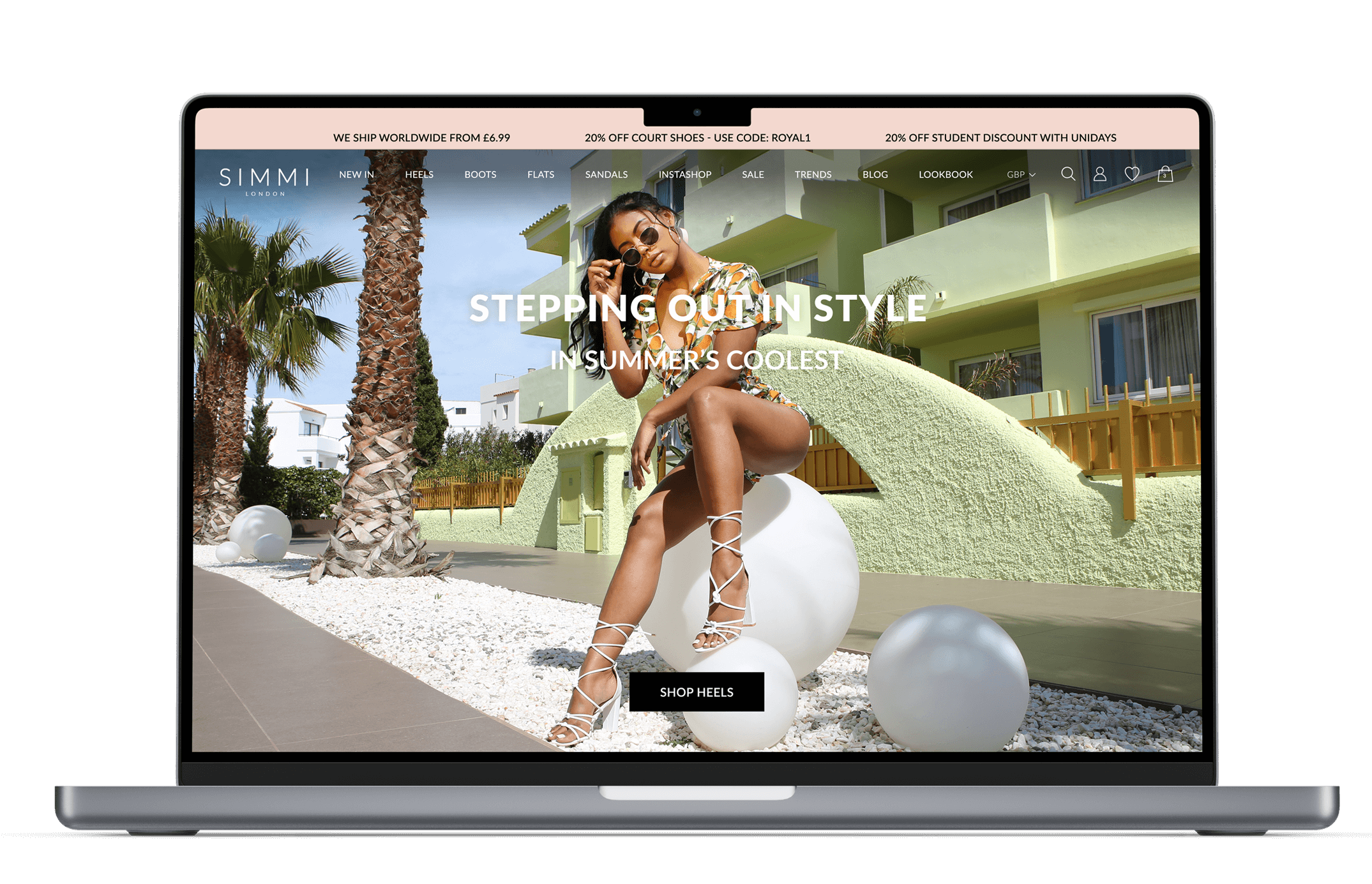 The main emphasis was to create a beautifully minimal, 'barely there' design, which allowed SIMMI's vibrant lifestyle and product photography undistracted attention. This was achieved by incorporating a transparent header design which 'floated' over the background imagery.
The results were published during Autumn of the same year, catapulting SIMMI into a new phase of growth. 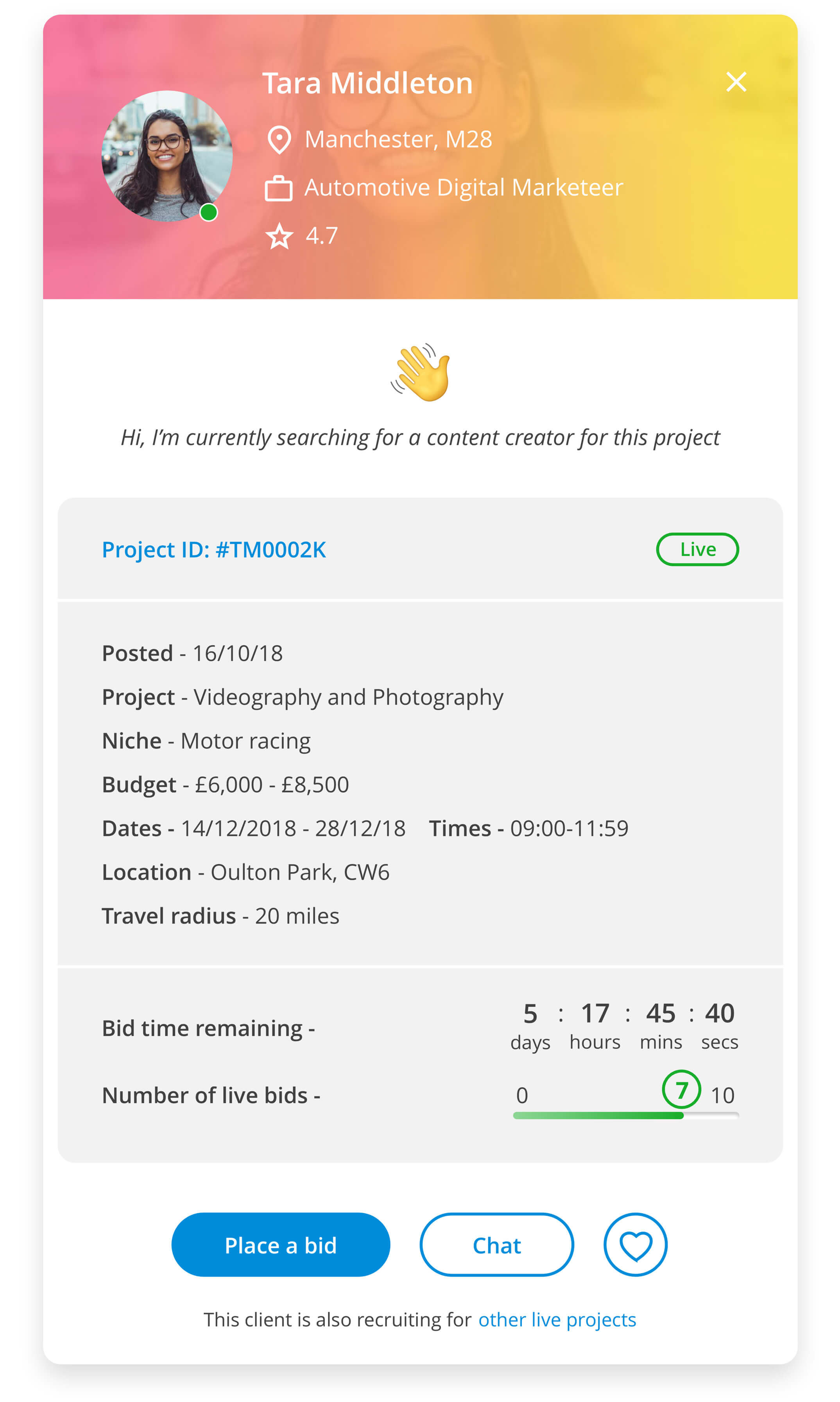 Creadoor is an online marketplace where individuals and small enterprises can find and hire creatives to create high-quality photos and videos, to promote their business. 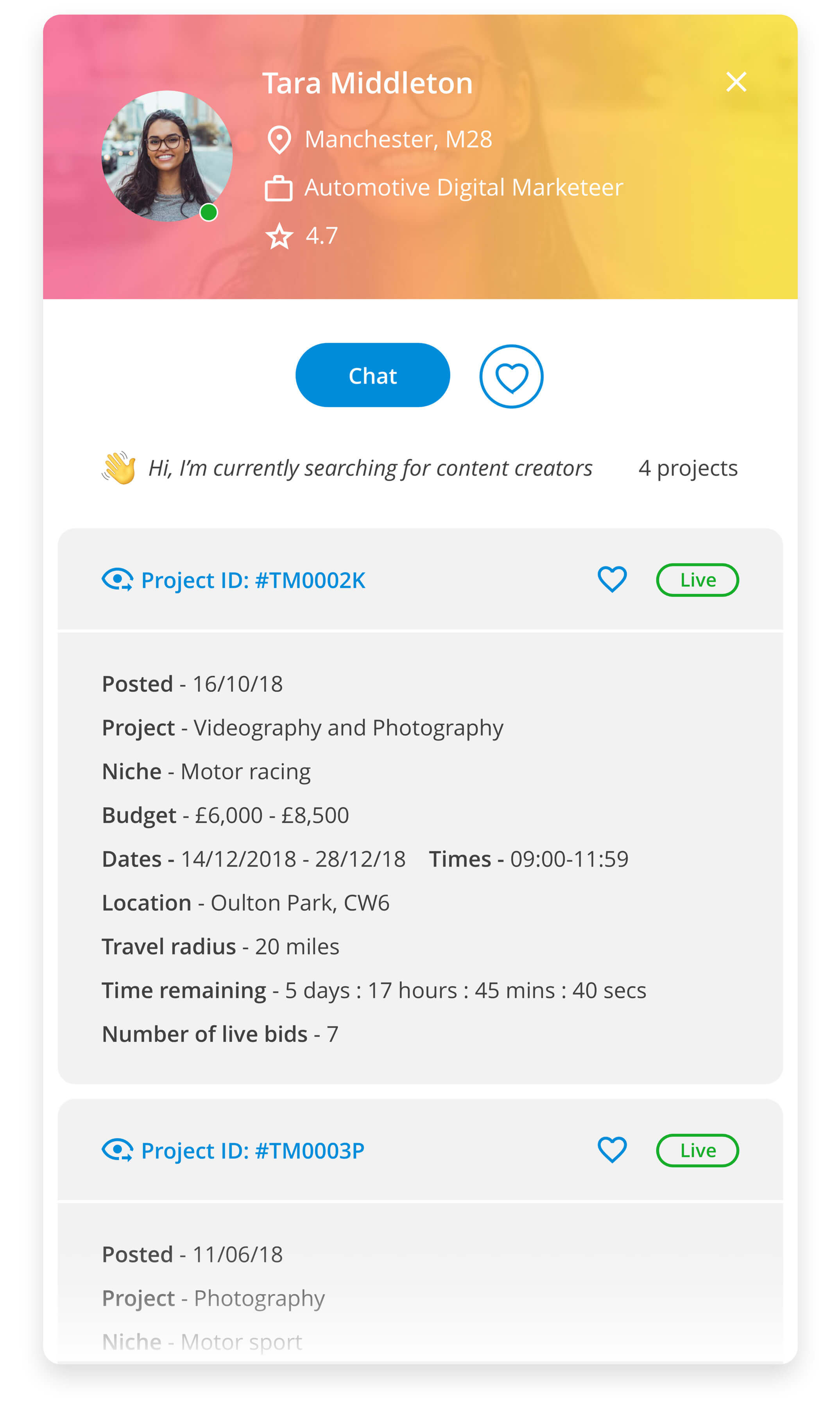