Berlin-based FinTech Raisin GmbH is a trailblazer for open banking in the deposits and investments space. Available in the US and across 28 European countries, Raisin is consistently named one of Europe’s top five FinTech’s and is backed by investors such as Goldman Sachs, Deutsche Bank and PayPal.

In 2017, Raisin GmbH established their UK subsidiary and Raisin UK was born; a UK savings marketplace connecting savers with a range of banks offering deposit-protected savings accounts with competitive interest rates, making it easier for UK savers to grow their money.

The Raisin UK homepage is one of the most visited pages on their site, with around 1,000 unique visits (1,100 non-unique visits) per day. It forms a key entry point in the onboarding journey for many new users, so it is crucial that the homepage clearly communicates the brand's key proposition, instils confidence in the user and clearly explains the savings products on offer. This is particularly true for a brand which is a relative newcomer in the UK savings space and not yet a familiar name for many UK savers.

The UK homepage UI/UX had been established through user-testing during Raisin UK's first year.

What we have learnt so far

Examples of successful homepages featured on the Raisin UK website during 2020: 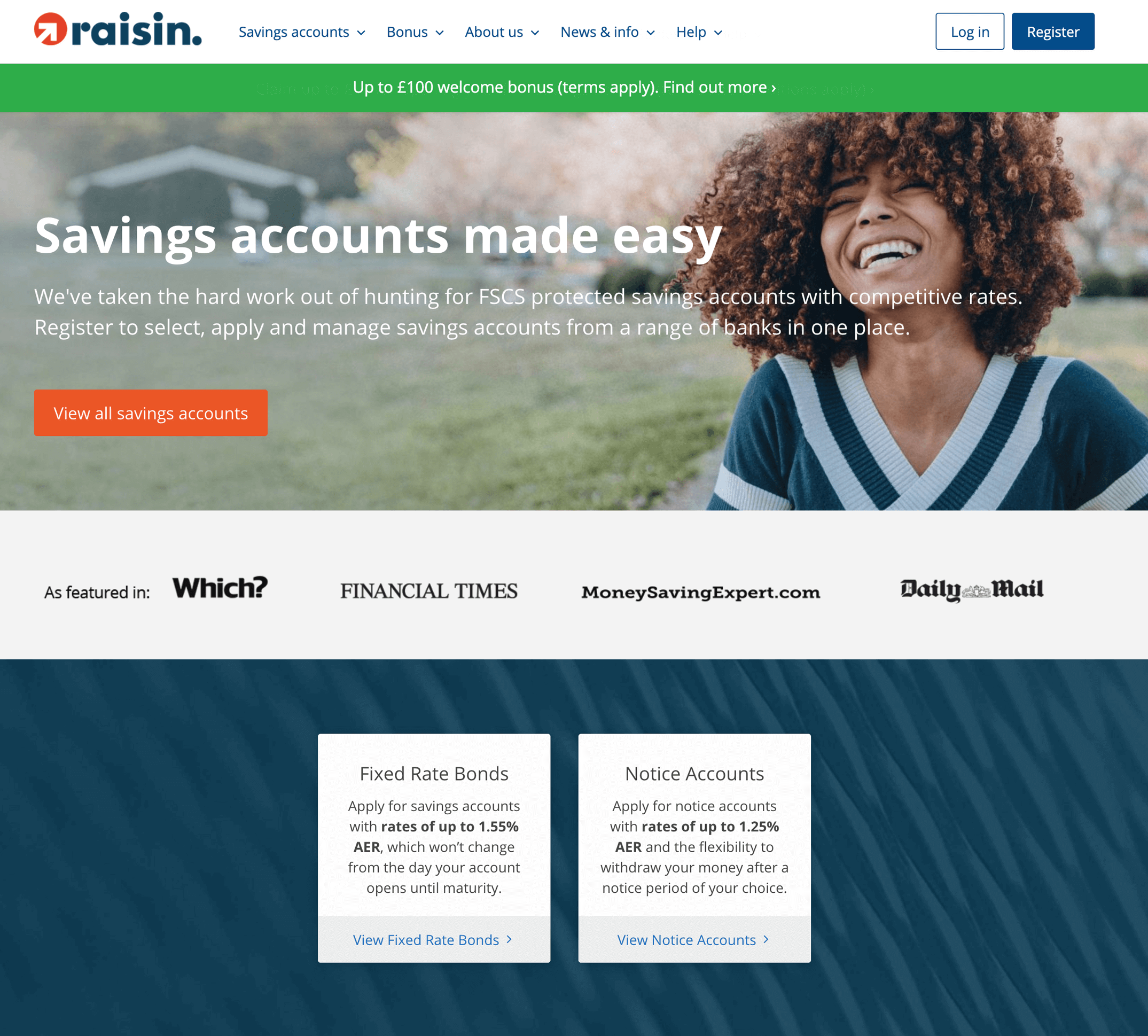 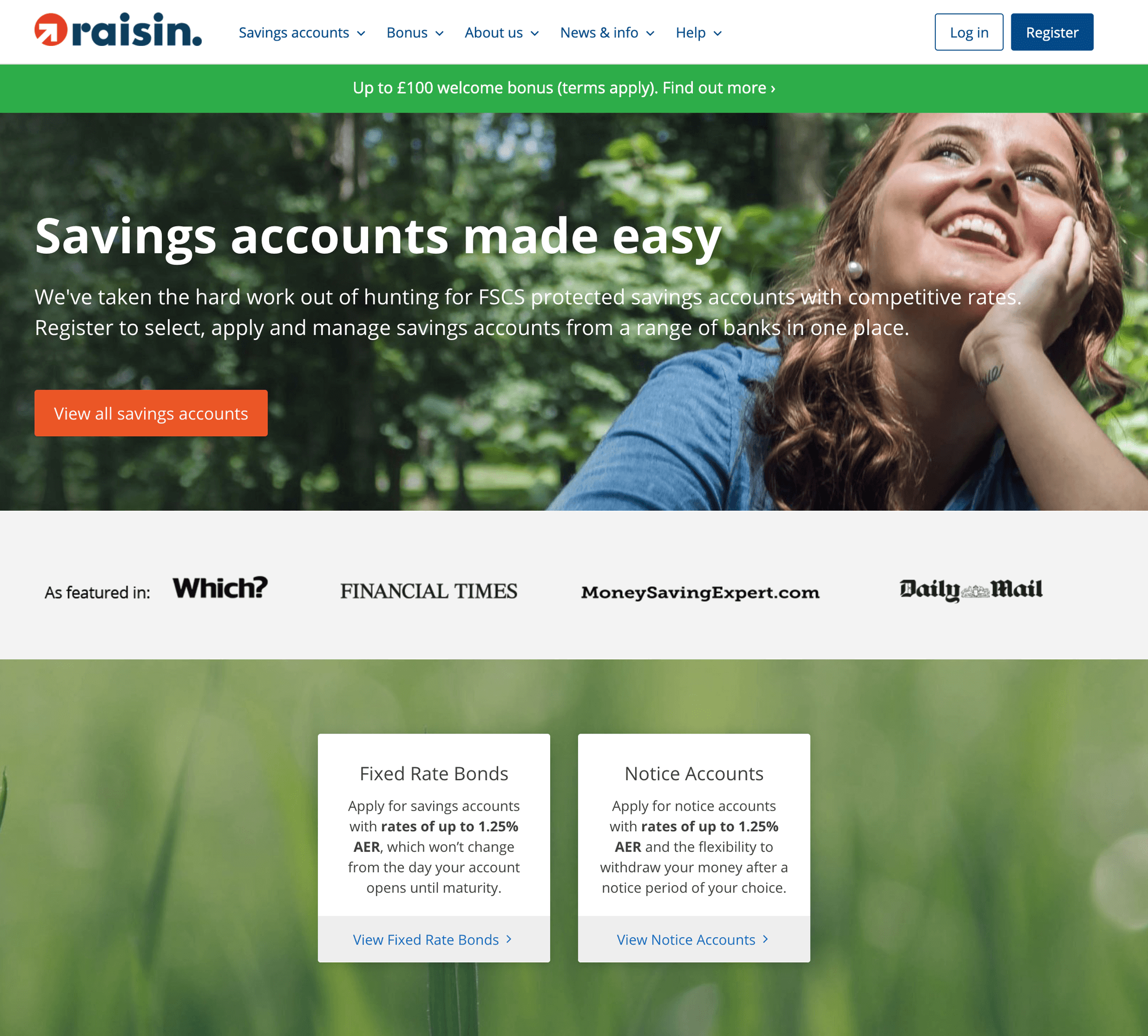 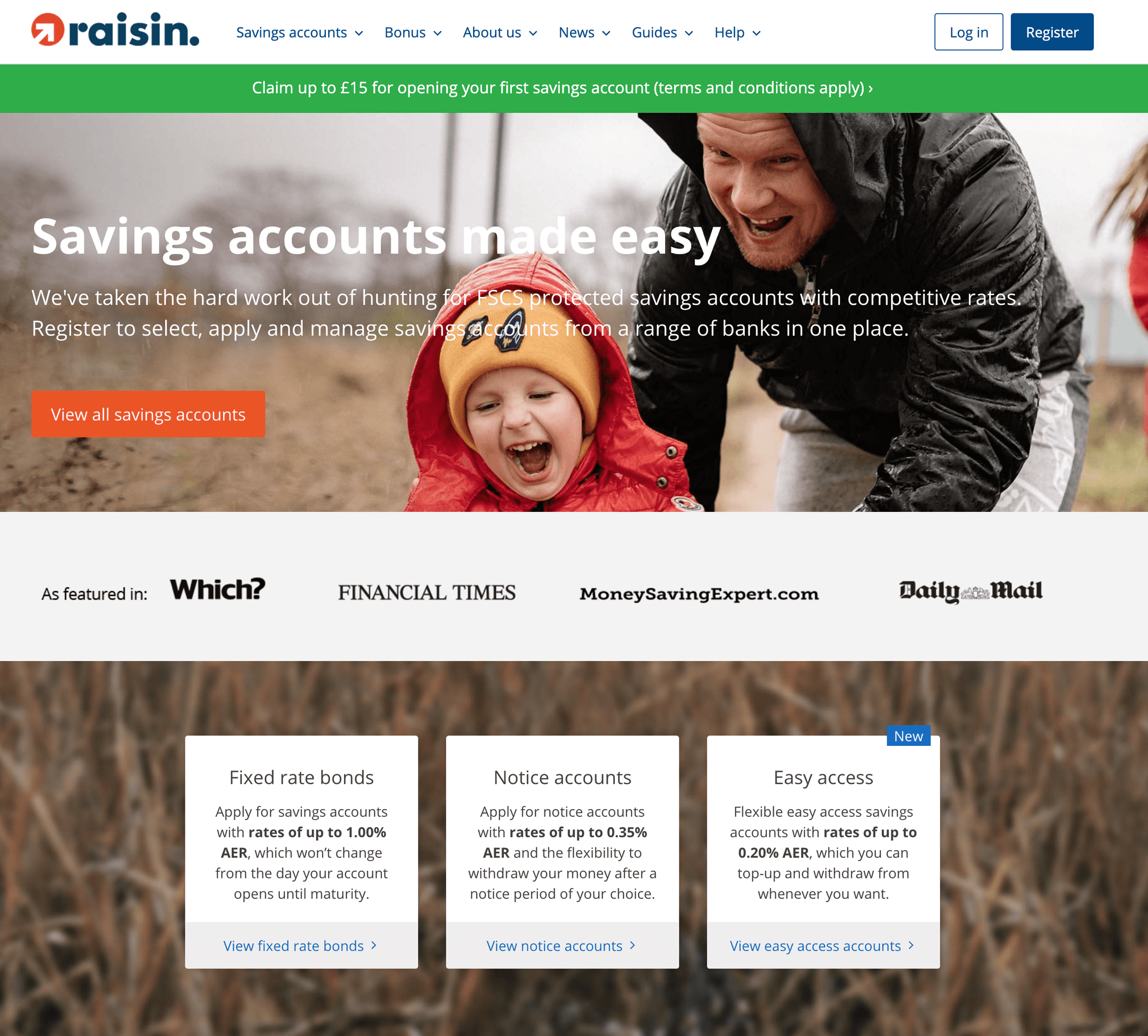 During Q1 2021 Raisin UK received a request from the Berlin-based Brand Marketing Team, asking that we align our approach to homepage hero design to match the approach being applied to the German and other European websites. Their intention was to maintain brand alignment across all Raisin platforms, requiring that UK:

Although the request for brand alignment seemed reasonable, in order to implement it, UK would have to abandon some of the effective learnings we had previously implemented and also adopt several design aesthetics which in our gut, felt inappropriate or alien to our UK audience.

Challenging brand assumptions with our hypothesis

Diverging sufficiently from 'Brand's' European design aesthetics, in order to present a home page which appeals specifically to a UK target demographic will inspire confidence and trust in prospects, improve CTR and drive registration and conversion rates on the UK platform.

So our hypothesis challenged the alignment requests from 'Brand', but to prove that our concerns were valid or otherwise, we needed to gather qualitative / quantitive data. We firstly agreed with the Brand Marketing Team that we should test their proposals in our UK marketplace to ensure suitability. The first task was to survey our existing customers and get their feedback. I mocked up LOOKS of UK homepages using the design approach proposed by 'Brand', to compare directly with the natural LOOKS which we currently used in UK.
The survey was sent to 18,000 registered customers and ran for 14 days, receiving 1,107 total responses & 1,085 complete responses.

Which of these two looks do you think works better on the Raisin UK website?
Comparing the Campaign gradient background vs Natural background

"The blue background looks more professional, softer and friendly. The title looks right, not like 'stuck on.'"
"The colours used in the first option suggest to that it is less business-like - even a little frivoloue. Finance is a serios business and I feel the website should reflect that."
"Easier to read on the plain bue background. The other gradient background is definately distracting from the text and the offerings."
"Blue looks classier and is more in-line with a financial site."
"The blue background is easier to read and more 'soothing' than the other one."
"I really don't like the 'shouting' headline in the red one."

Which of these two looks do you think works better on the Raisin UK website?
Comparing the Campaign gradient overlay vs Natural photography

"Looks really odd to have a picture of someone with a background that is not full colour. Looks like the website has loaded incorrectly."
"The natural one looks cleaner and more professional, also the red and overall effect makes the girl look as though she's in pain."
"More relatable to see people in true colour."
"The capitalised text in the red screen feels aggressive"
"Nice to see people. The red one looks like the colour settings are wrong. A proper photo works best in my opinion."
"The normal photo is friendlier than the red."
"The normal picture is clearer using true colours and the message stands out better."
"Red variegated background is distracting."

The next 5 questions were more specific and compared the overall Campaign gradient / Camaign font vs Natural photography / Raisin UK font:

"Images should be crisp and professional. Quirkiness is not appropriate for a financial institution."
"I don't like the gimmicky red colours and shades. Looks unprofessional, not trustworthy."
"No fuzzy backgrounds, use strong colours on a pale background."
"Clear, uncluttered, straightforward and relevant".
"Use reassuring, friendly images to elicit confidence in choosing Raisin."
"I don't especially mind as long as the text is clear to read. Some colours just don't lend themselves to that, especially graduated colour changes."
"The clearer the info stands out, the more likely I will read it."
"The headline on the red versions looks aggressive."

Which of these two bonus promotion element do you prefer?
Comparing the hexagonal badge used by 'Brand' vs the circular badge used by UK marketing

The answers were interesting and from amongst all of the feedback, 7 financial services websites proved most popular to Raisin UK customers. Each of the 7 shared similar UI elements and these similarities were expressed as preferable features by our customers:

The use of these common UI elements fed into our survey results, helping us establsh a new set of design principles which supported our hypothesis and provoked our next round of research 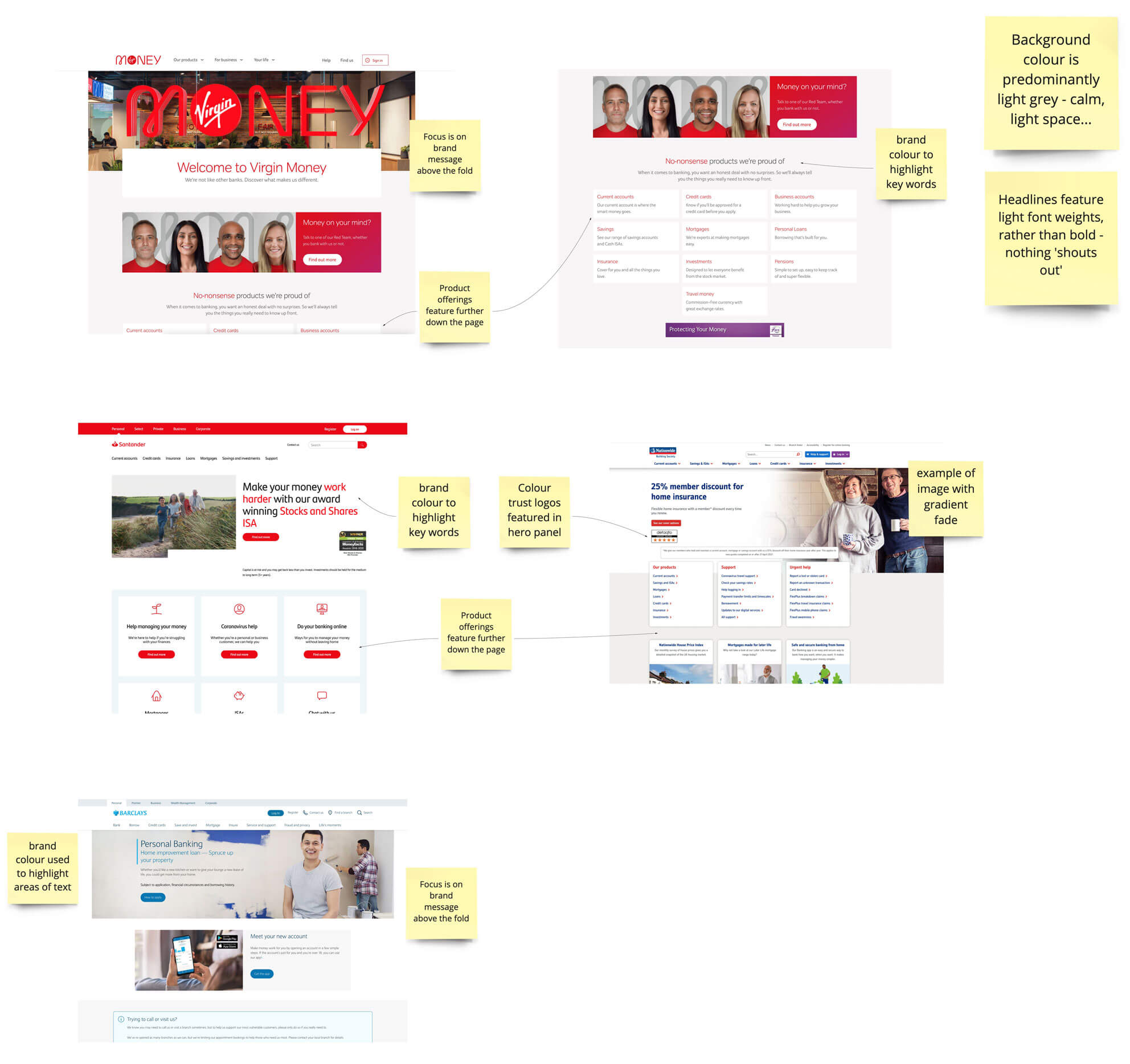 The quantitive data collected in the survey supported our hypothesis, that the design approach being suggested by 'Brand' (use of 'campaign gradient', 'campaign font' and hexagonal bonus badge) were not favoured by our UK audience.

We condensed the vast amount of qualitative feedback we had received in response to the 9 questions (above) and established 5 overarching principles, which would guide our approach to UK homepage hero design going forward.

So, we had gained a huge amount of insight into the preferences of our existing UK customers, but the opinions of this audience could well have been influenced by their prior exposure to and familiarity with using the Raisin UK website.

The next step would be to survey prospects in UK; people who are not Raisin UK customers and have likely not previously seen the UK website. This is the audience to whom first opinions are of primary importance to Raisin.

I ran an ideation workshop with stakeholders from UK teams, exploring ideas based around our pre-established '5 overarching principles'. This informed a series of mockups featuring a light grey background, clear, friendly photography and some 'wildcard' alternatives which featured a clean, dark blue background, Raisin app-based foreground imagery and illustrative foreground imagery.

We also explored alternative ways to present the bonus promotion. The green badge was a global element and its position was fixed within the user interface, almost always obscuring the underlying homepage imagery. As an alternative, To resolve this, I wanted to test a green bonus strip sitting below the navigation header; a mechanism which generally proves successful and familiar on e-commerce websites. 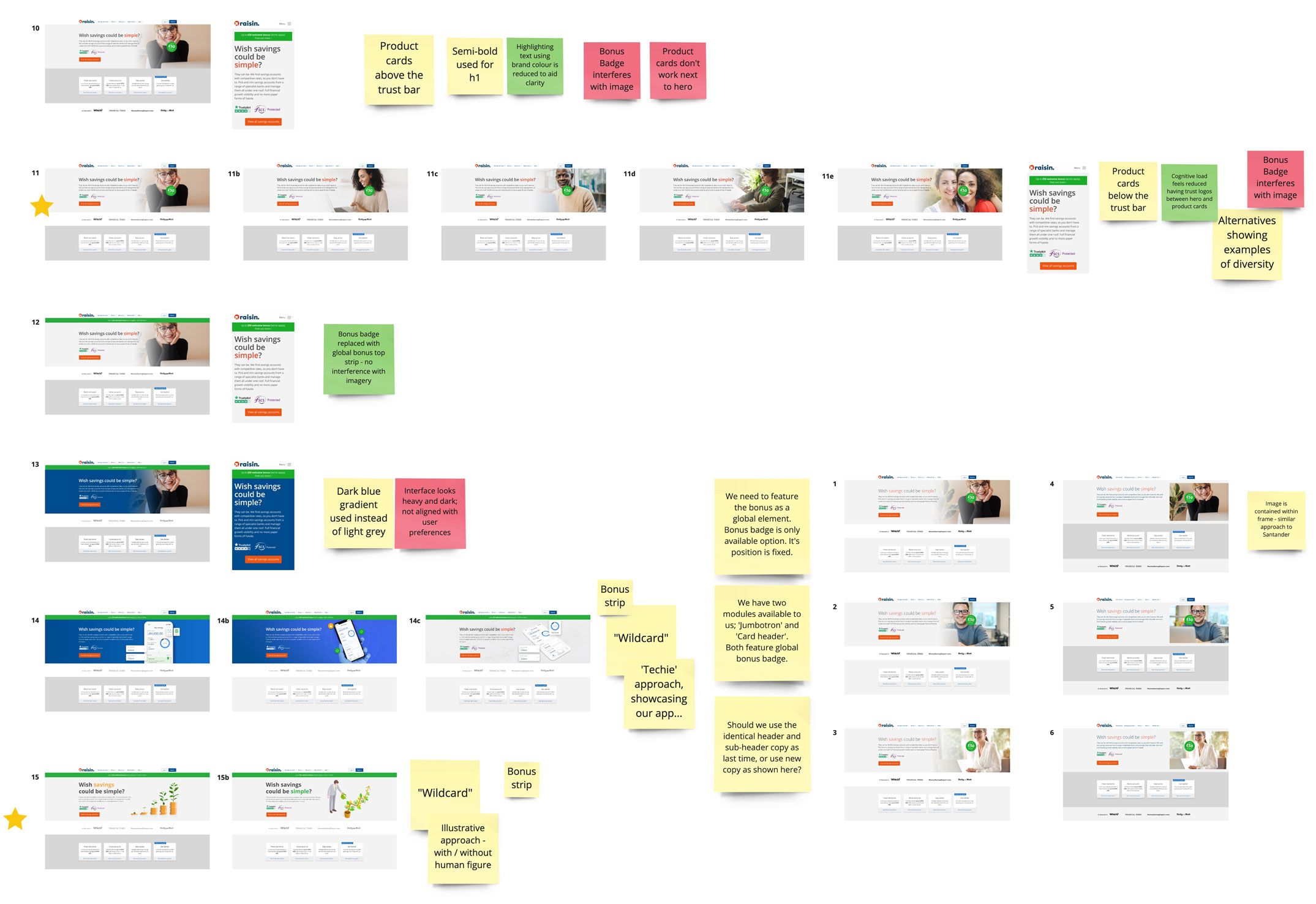 Two firm favourites emerged from the workshop (one with a photographic background (E-1) and one with an illustrative background (F1) (see below).
These would form part of the following survey to non-Raisin UK customers.

The survey was sent to 500 UK prospects (Non Raisin UK customers, who were principally interested in dealing with topics of finance and/or wealth building). 50% were male, 50% were female. The complete survey contained the following 6 'LOOKS'. The 4 which we had tested perviously with existing customers, plus the two designs established in the ideation workshop: 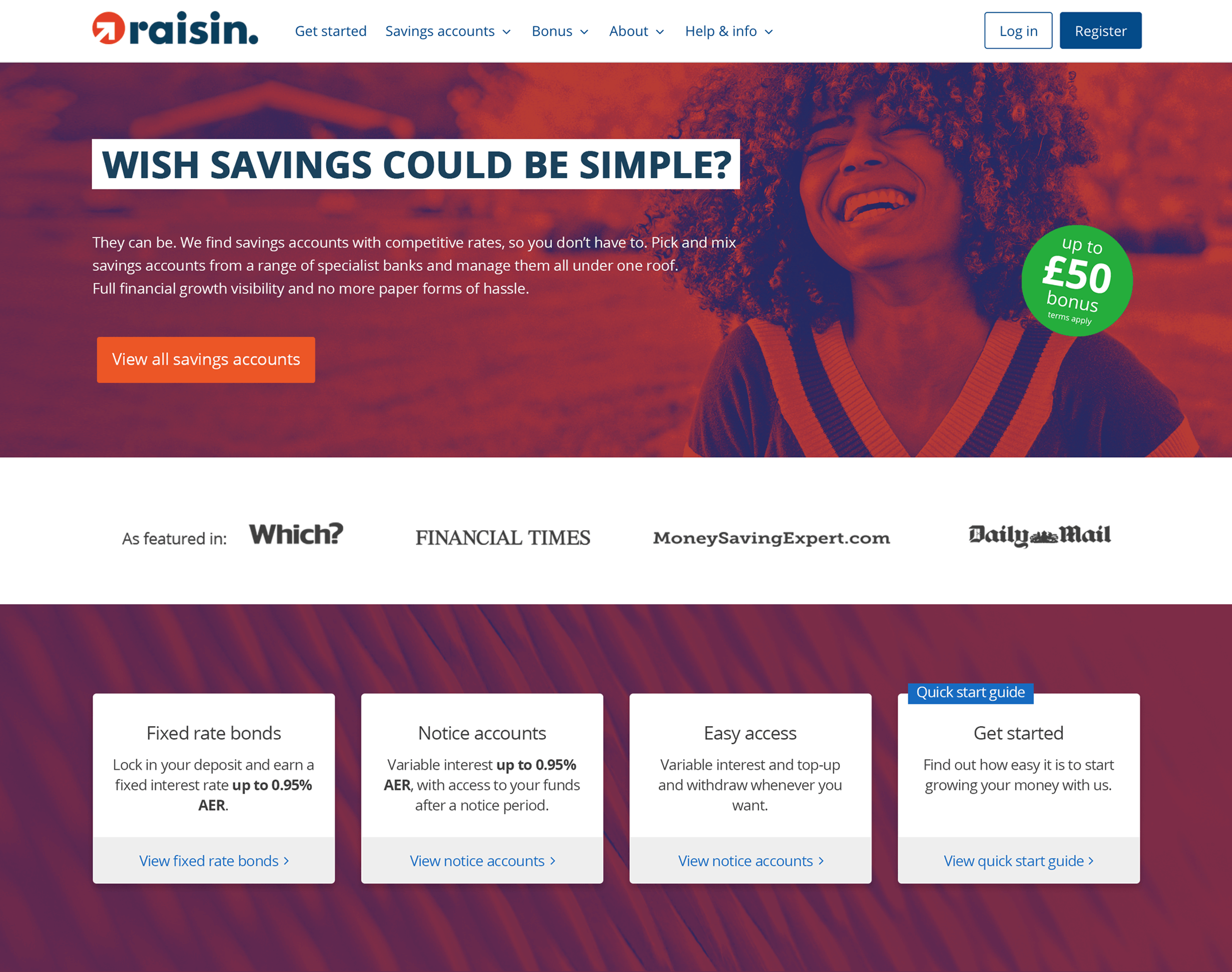 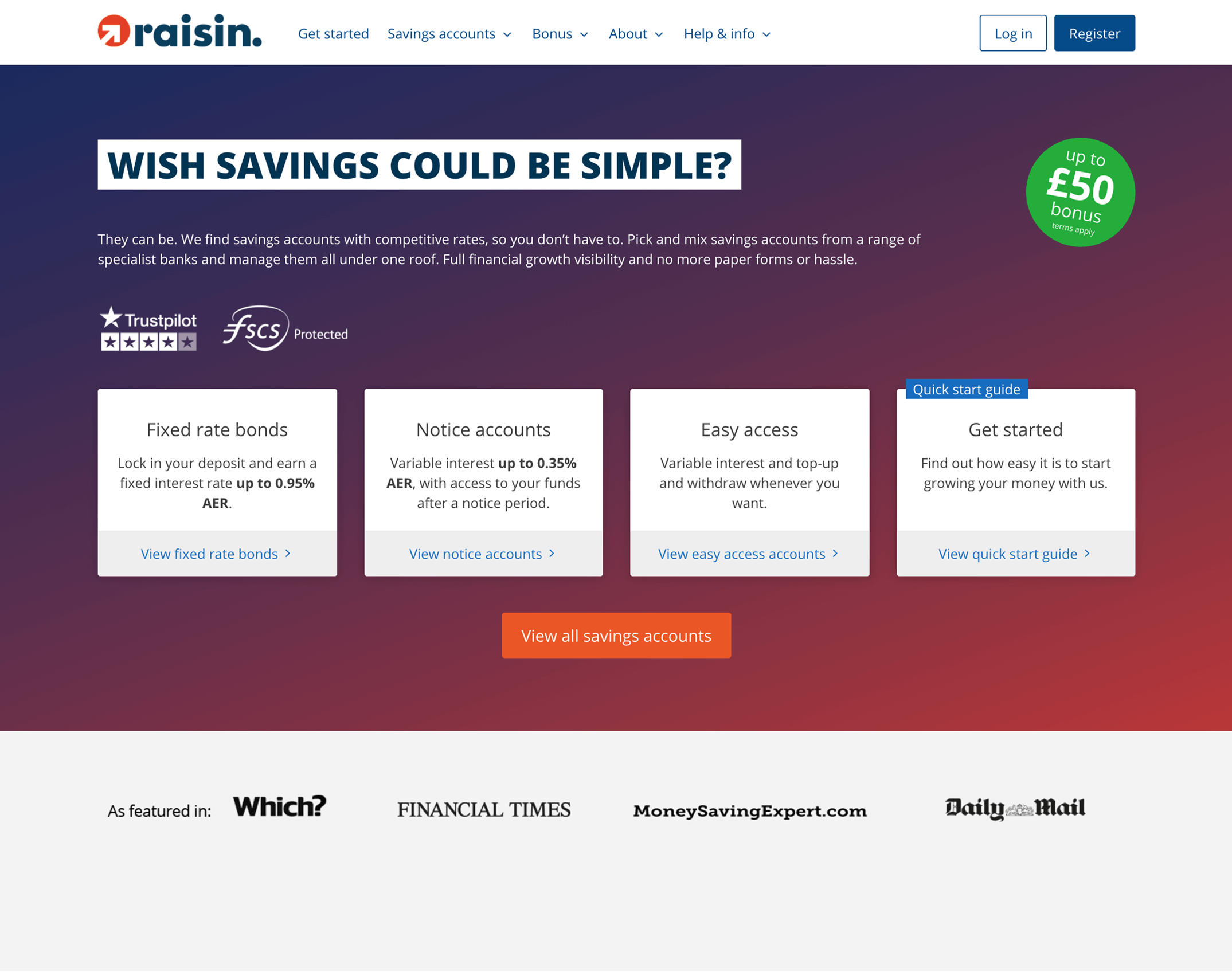 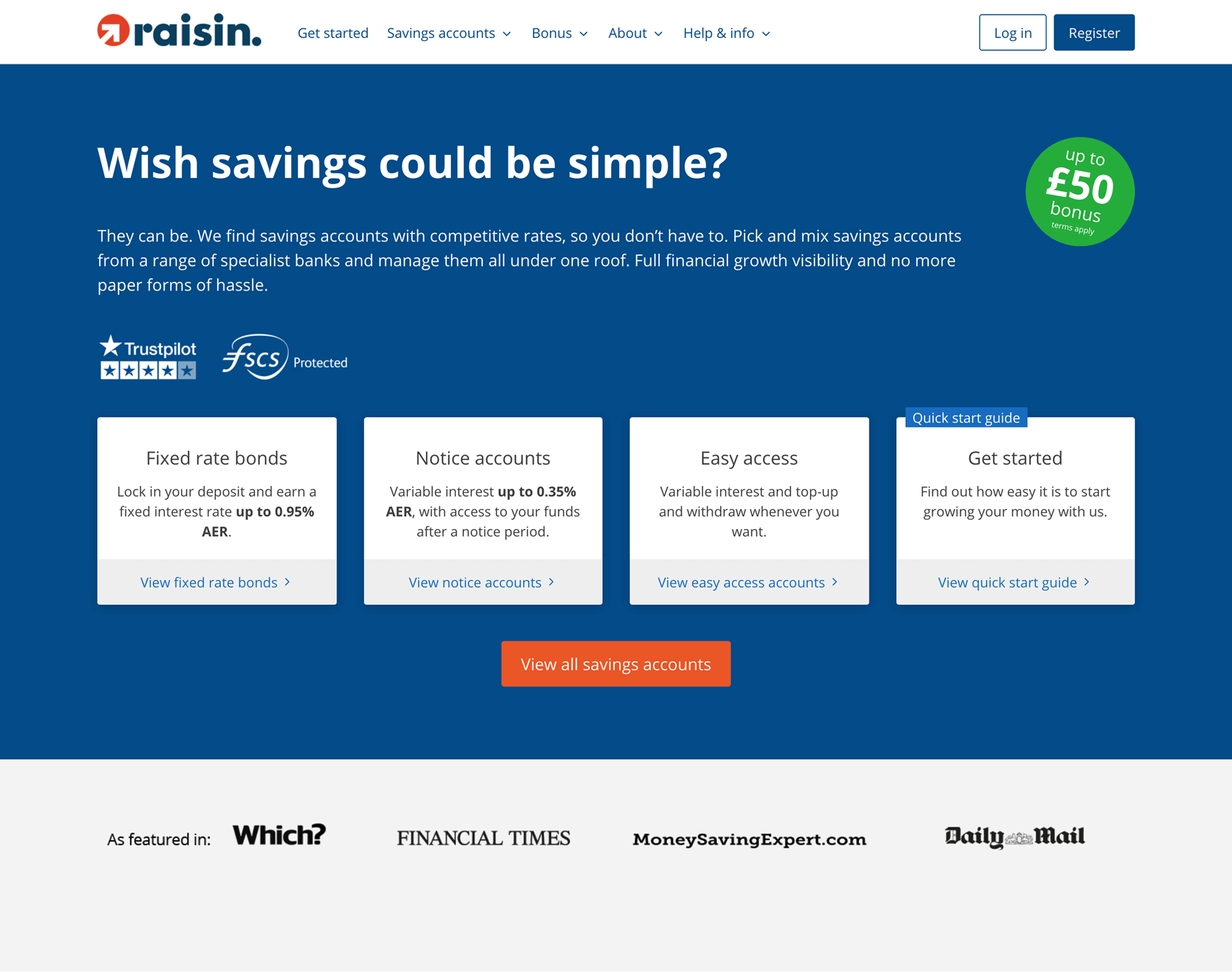 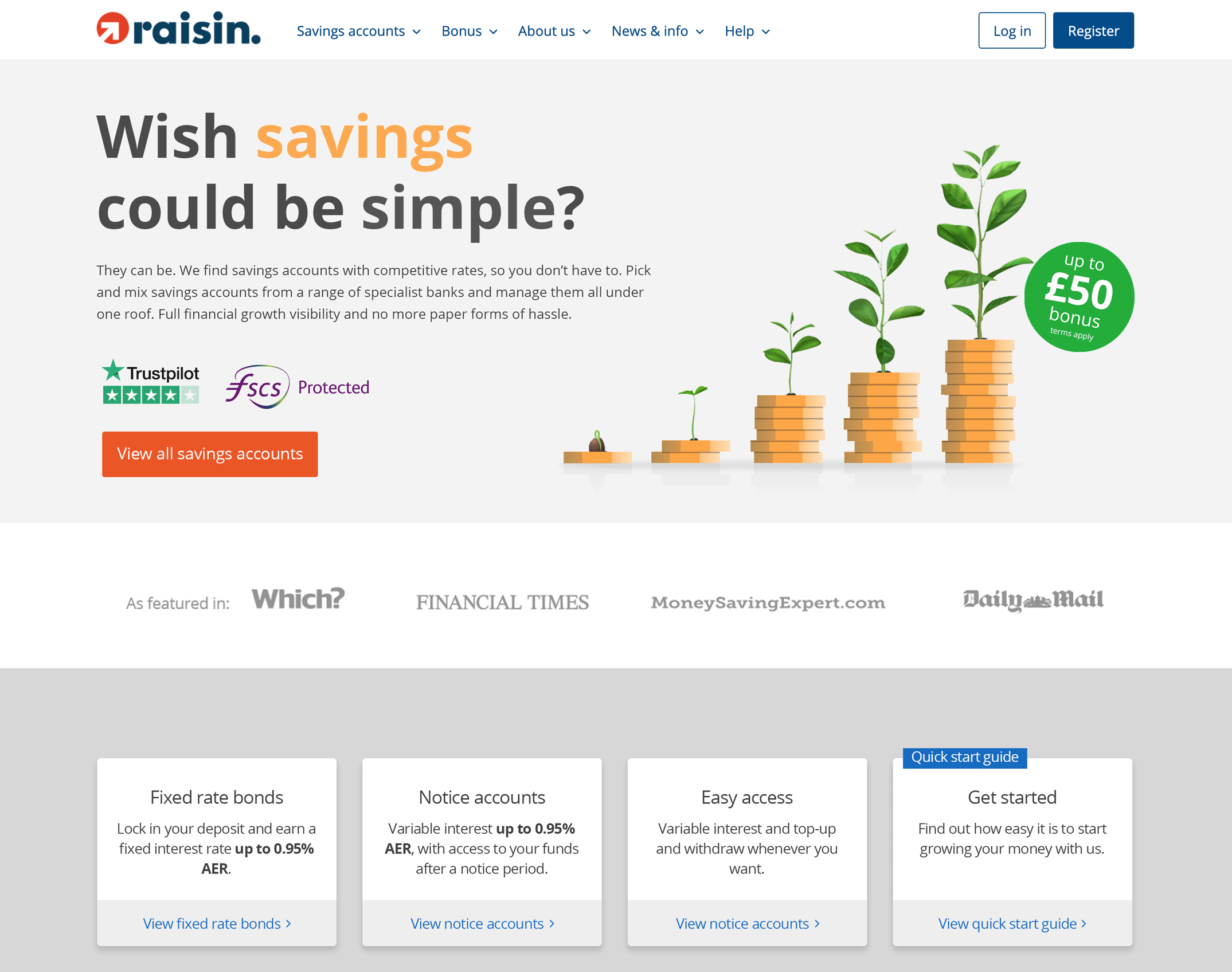 This brand seems professional and trustworthy. I would feel comfortable trusting this company with my money.

This brand seems easy and hassle-free. I think using their service would be easy.

This brand seems friendly - I think they would be friendly and approachable if I had to speak to them directly.

This brand seems modern - I think the service they are offering would be innovative and modern.

Which of the homepage designs (LOOKS) would you most like to see on the Raisin UK website? 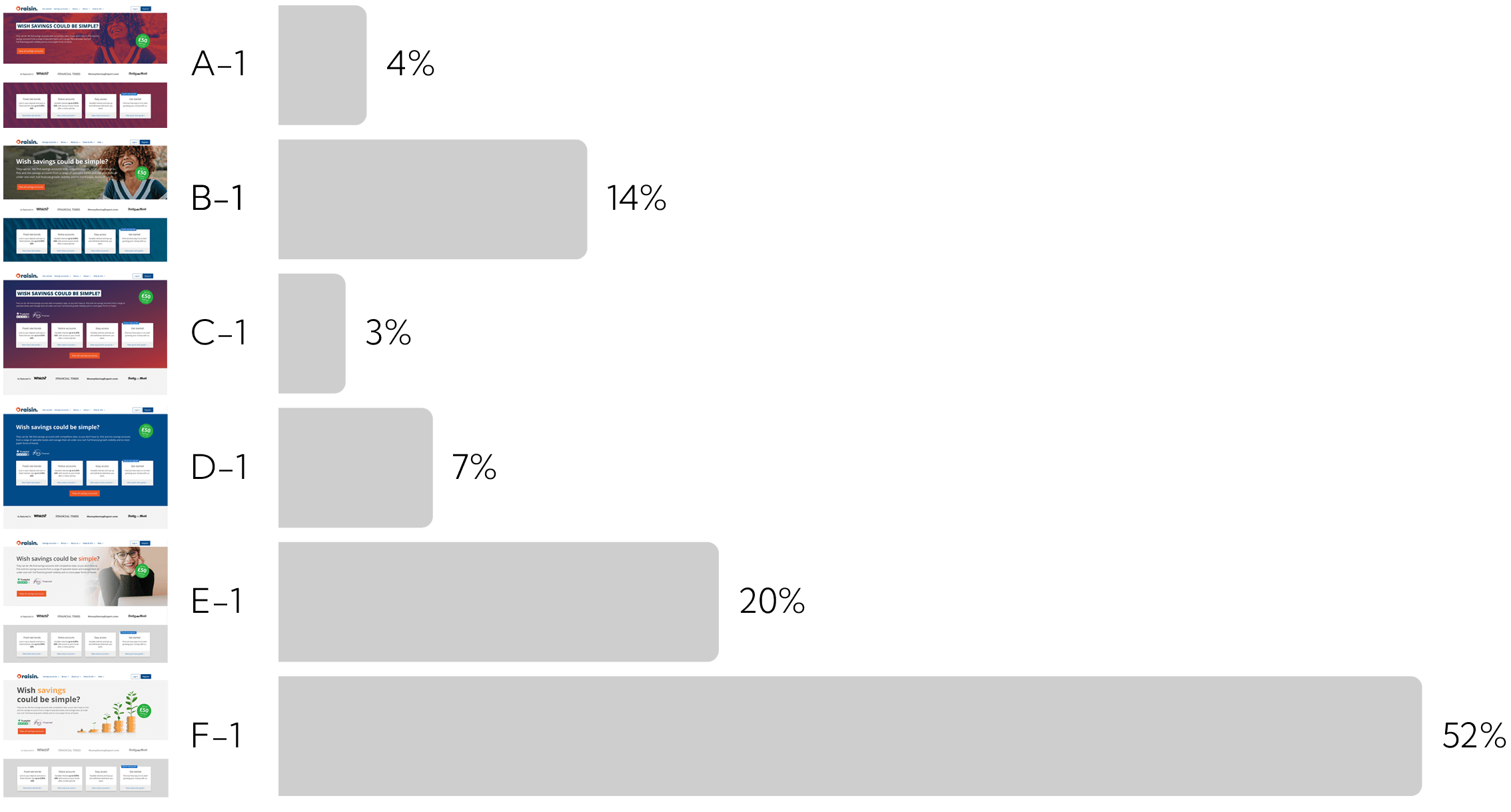 The quantitative data indicated a clear preference for LOOK F-1. This design also either won, or rated very highly for each of the 4 preceding statements.

Which of the bonus promotion element design do you prefer?

Compared to the bonus strip, the bonus disc scored better across the board.

Some comments relating to F-1, the most preferred LOOK.

"Visually clean and simple - strong use of reliable aliances (Which etc)."
"its clear, concise, easy to understand and more eye catching and it also looks different to other finamcial advertising."
"Clearer, lighter look. Emphasises savings more and fscs/trustpilot stands out more. Prefer symbol of tree growing as hope savings growing rather than attractive female picture. If meant to show friendliness, what is wrong with older female or male young or old?"
"Organic and natural. No woke people politics going on."
"Images of growth no gender or race bias nice fresh clean image."
"I prefer reading the information that’s got a white or light background. The acorn money tree savings caption is good. The FSCS Protection and TrustPilot logos are positive."
"it is the most conservative of the images, and the image is of more interest."

The final solution was a high-performing homepage which was overwhelmingly received by our target demographic as professional, trustworthy, innovative and modern. After launching the new homepage in Q3 2021, we saw: 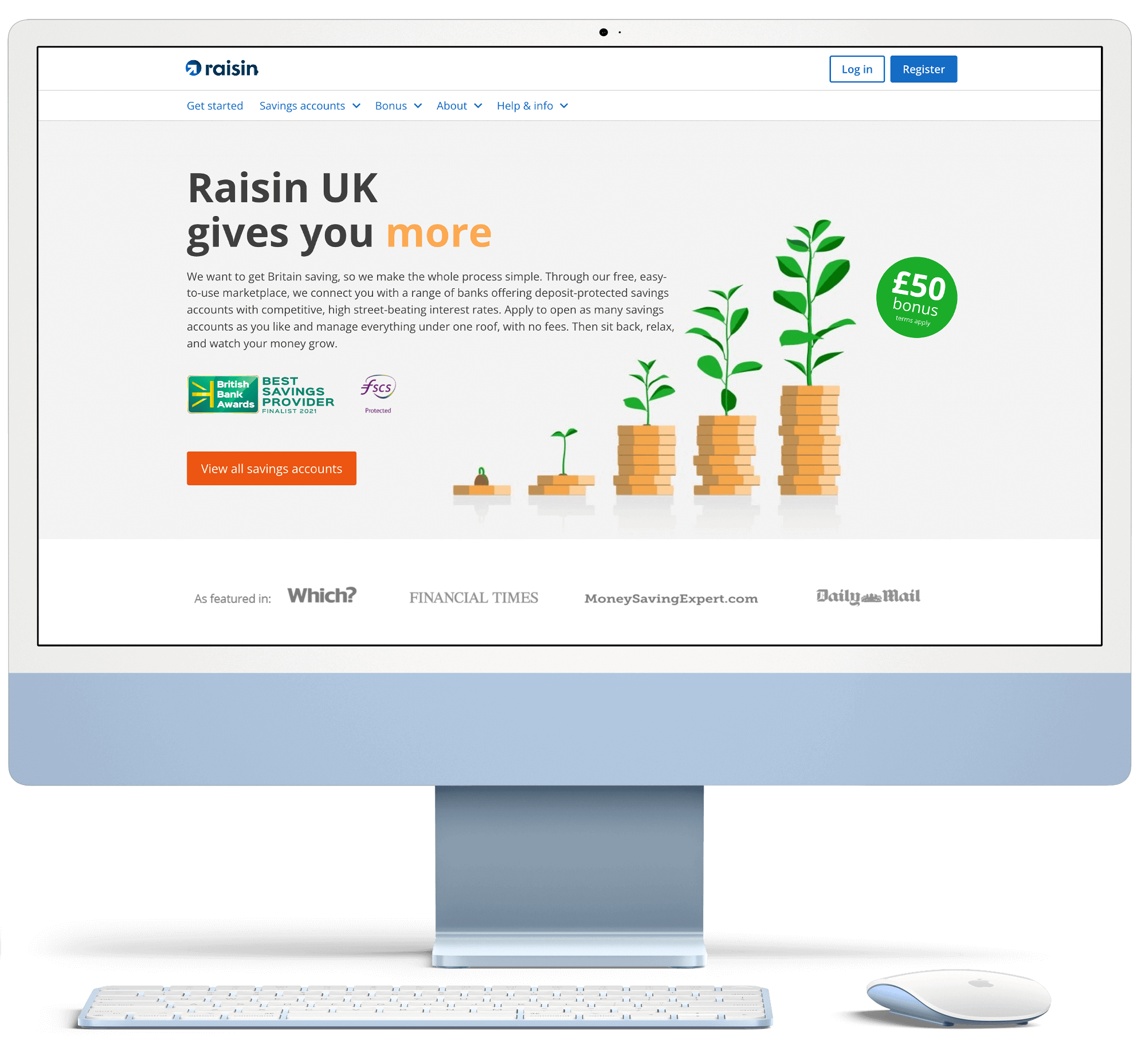 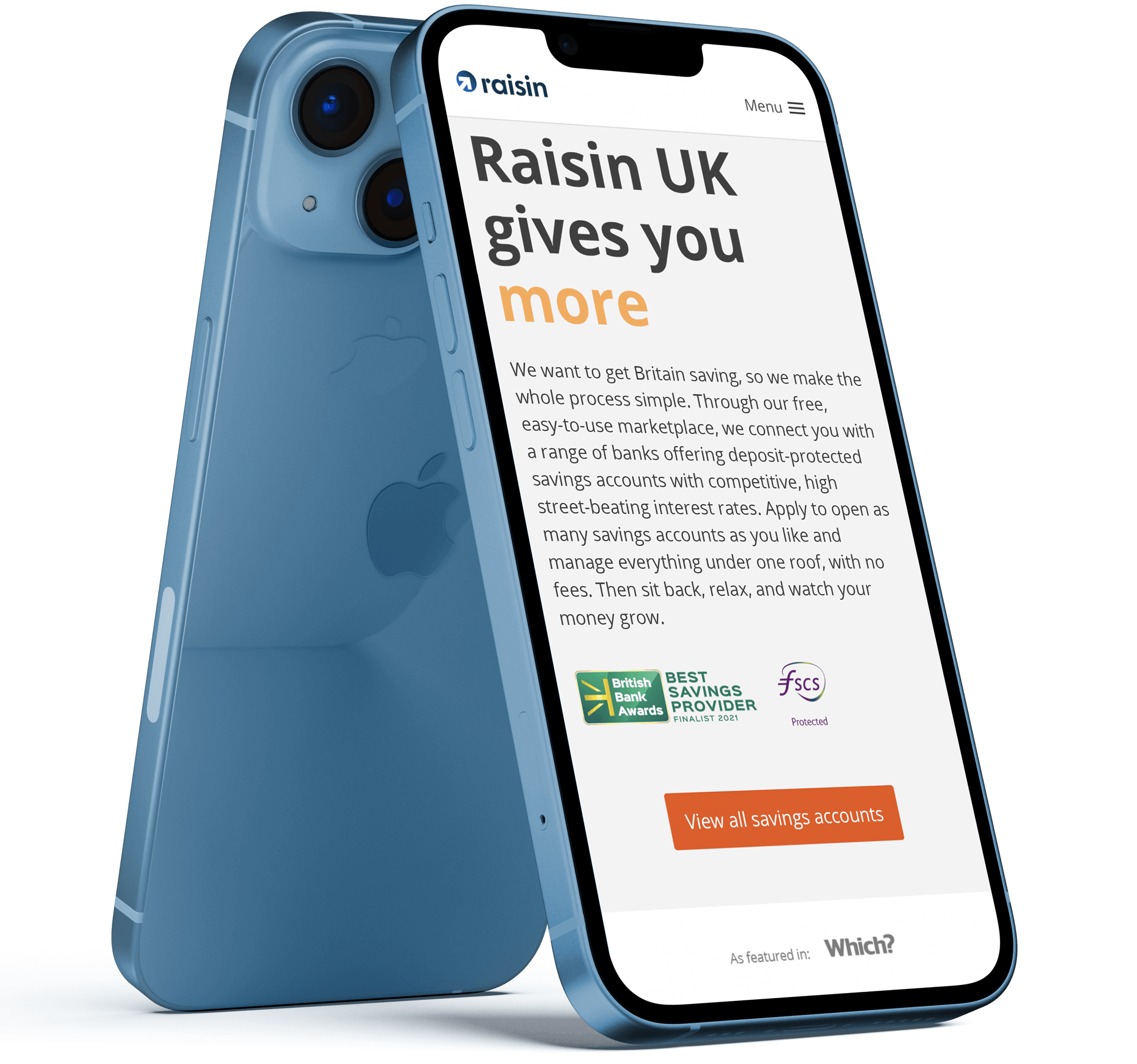